Pretty, precious, precocious. Raina is this and more. Like all children, in one way or another, she is perfect.

A pale white Chinese girl with white hair and steel blue eyes, in a small Georgia town she gets attention and is the local celebrity. Everyone knows her and everyone asks about her.

Her parents were looking to adopt a Chinese child and found it difficult because of a quota. Then they discovered another list, of special needs children. They found a little boy with Albinism, but he had health problems and the orphanage took him off the list. That is when they found Raina.

Like Dora from her favorite children’s book, Raina likes to explore. Her favorite destinations are inside her house. Outside “is mostly where I bump my head.” Her mother says she’s fast and has “had stitches from the playground and lumps and bumps and scratches.”

Raina is in first grade. If she holds books very close she can make out the words. “She’s doing really, really well,” her mother says. “Considering that she has astigmatism too. At the end of last year she took a standard reading where they have to read 30 words in 60 seconds. And she read 74.”

She has several friends. She’s a social butterfly.” One friend tells people that Raina is blind. “Sometimes I want to tell people but my friends just go and say it right before me and I want to speak for my own self!”

Raina has two dogs, Uno and Flash and a cat named Fridge. She also has a brother. A year after they adopted Raina, the boy with health problems was doing better and was put back on the list. His name is Isaiah. They are quite a pair.

“Raina has made life very interesting. I’ve learned a lot of things that I never thought I would learn. She’s very lively, she’s a lot of fun. Sometimes she’s kind of strong willed and difficult. She’s a colorful character. We don’t know what we’d do without her.” 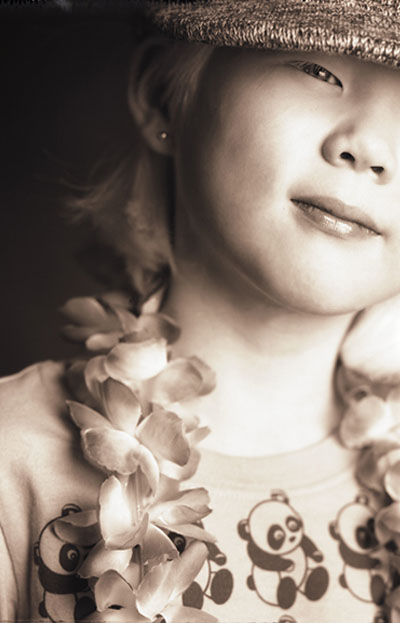 Raina isn’t able to see distance very well and has little depth perception. She can see colors, especially bright ones and it helps if they are against a background with a different tone and saturation. She can distinguish things if she is right on top of them. Raina has a rat terrier, with a red collar, named Uno. This is how she might see him. 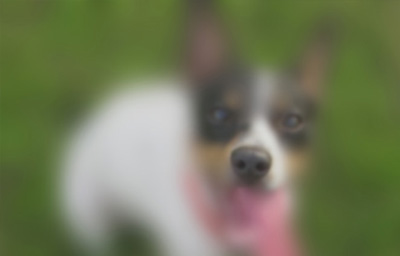