Wrestler, scholar, musician, and philanthropist are all labels that can be applied to Luke Putney, who at 17 has happily defied expectations, risen to challenges and embarked on a remarkable life. Blind from birth in his left eye, an aneurysm compressing his optic nerve devastated nearly all sight in his right eye during his adolescence.

He started wrestling shortly after having eye-related brain surgery, much to his doctor’s chagrin, and credits the discipline he developed in the sport, as well as his strong Christian faith, with leading to success in other areas of his life.

Blindness, he says, gave him empathy for other people and led him into philanthropy. He encouraged friends to pledge money for every wrestling match he won and raised funds to have a water well built in Sudan. He also hands out donated musical instruments to children at a local hospital and taught English to underprivileged children in Ecuador. For this and other charitable pursuits, Luke was named one of three Teen Volunteers of the Year by the Greater Atlanta Association of Fundraising Professionals.

Luke has a 4.0 grade point average, but his interests vary widely from academics. An accomplished bass guitarist, he plays in several local bands. His proudest accomplishment, however, was receiving the Timothy Award, which honored his work as a Christian leader.

“I’ve tried to be successful in everything I do so people can see me and say: ‘Hey, he’s blind and he’s still succeeding!’ I want to be an inspiration to those who have a little bit of doubt in themselves. I love helping those who really need help.” 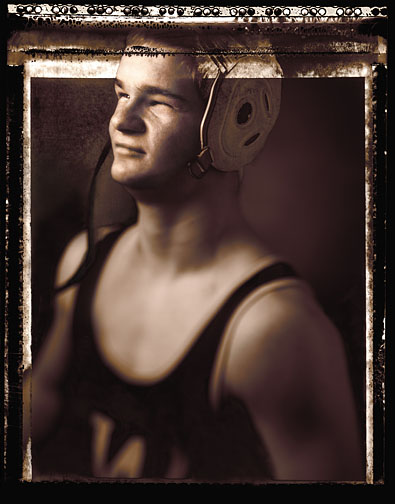 In the upper left corner of Luke’s visual field is a gray area where no imagery is visible. There are two medium gray “blobs” that obscure his sight, one at the top center of his visual field and one at center right. In the remaining areas of his field, he has contrast vision and can distinguish light and colors, especially yellow and green hues. Images are blurred and colors blend together as though looking through a layer of Vaseline. He has no floaters but he does have significant pixelization. This is how someone playing a guitar might appear to him. 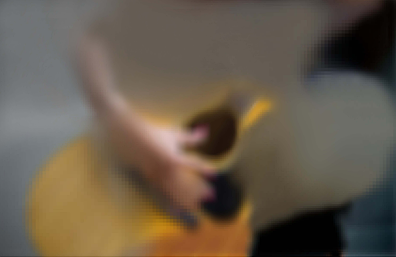