Helen Trentadue is sweet and lively, and if you’re looking for a good conversation, she’s your destination.

Being with Helen is like being at your own little party. Like gifted social people, she immediately puts you at ease. And she always has a story to tell.

Initially taking her diagnosis with “a grain of salt,” she became devastated when she learned how drastically it could affect her. Thus started Helen’s education, and she read everything she could on her condition. It was through this research that she discovered the Maxwell Low Vision Clinic at CVI (Center for the Visually Impaired) where, she says, she “learned to live whole heartedly independent.”

One day while getting gas for her car she noticed liquid pouring on her leg and realized she didn’t have the nozzle in the tank. Then she noticed she had two unmatched shoes on, “and I thought: whatever in the world is wrong with you Helen!” Although she passed her driver’s test, she lost her spirit for driving. “I was always being cautioned: ‘You live in an area where children will be playing in the streets. Everybody has pets.’ And I heard that and will admit I just lost my incentive to want to drive again.”

Not to be daunted, Helen took computer classes at CVI. “I can send email. I can do quite a bit on the computer and I write all my letters and so forth. One thing it does, it saves me from having to buy beautiful stationery. So that, in a way, satisfies me!”

So Helen traded her car keys for a keyboard. Nothing can stop her. 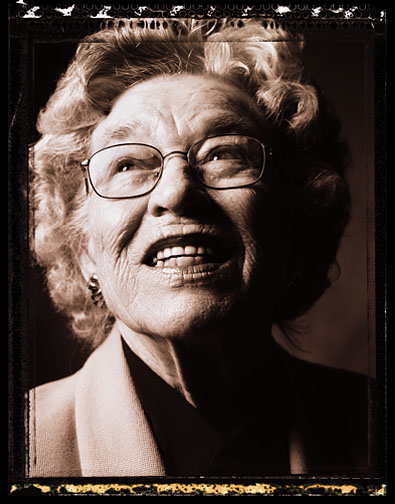 Helen’s vision differs from what doctors typically report for someone with macular degeneration. The right side of her visual field is dark, blurry, and foggy. The center of her vision is light and images fade away. On the left side she can make out some objects and color, although it is difficult for her to determine details like eye and hair color. Vertical straight lines appear distorted and wavy. Due to Charles Bonnet Syndrome, she sees visual hallucinations of miniature, green bushes with tiny, white flowers as well as fluttering Monarch butterfly wings, clear and distinct, superimposed off to the side of her vision. 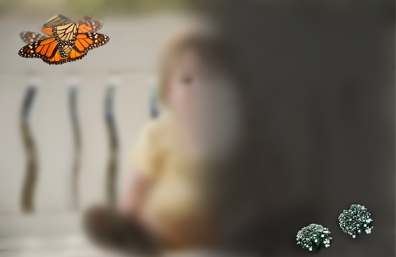