Blind from Birth with No Known Cause

Annie Maxwell did not know she was blind until she was seven years old. “Nobody told me. I kind of thought everyone lived in the same fogginess that I did.”

When her brother, a year younger than she, started school, she said, “Hey, wait a minute. Something is not right.” That was the last time Annie has ever been left behind.

When kids at her children’s school made fun of their mom’s eyes, Annie asked to do training sessions with the students to teach them about blindness. She was a hit. The children understood. It was the adults that became the obstacle.

“I realized this, that when you’re visually impaired or blind, you have to be the leader, because if you’re not in the leadership role, they won’t listen.” So Annie got involved with the school fundraisers, tallying more money than anyone else, and was elected president of the PTA. Now they listened.

Parlaying her intelligence and charisma into a life filled with family and achievements, Annie went on to receive a masters degree in recreational therapy. She teaches children and young adults how to manage their lives in a seeing world through the STARS program at CVI (Center for the Visually Impaired).

She recently received a Robert Wood Johnson Foundation Community Health Leadership Award for her work, a prestigious honor never before bestowed on someone with a visual impairment.

“I’ve always felt that I had to kind of live above other people and what they were doing in order to make myself known and to make myself noticed as an individual. I don’t know if that is something that is good or bad, but it is one of the things that is real.”

Annie’s vision is categorized as light perception and contrast vision. Her vision is not measurable in a doctor’s office and she can’t count fingers on a hand, but if there is light and contrast she can make out shapes and see colors. On a bright day she can determine where the sidewalk ends and the grass begins. On a cloudy day, if there isn’t much contrast, everything looks gray. When approaching an object she can’t see, like a pole, she can feel it before she gets to it, because the sound around her changes. 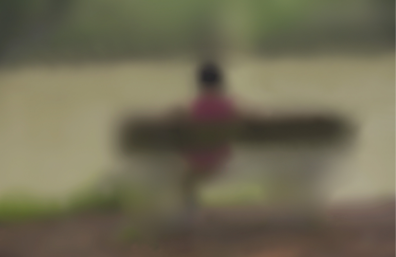