I See Myself…
“Proving That I Can Do Anything”

A week before school officially started in 2008, Georgia Tech freshman student Michelle Plunkett was repelling down a wall during a Navy ROTC training drill. She fell and broke her sternum in half, along with six ribs which punctured her stomach. The puncture led to the discovery of an undiagnosed gluten allergy that Michelle had had since birth. A physics major, she continued to take classes while healing and thought the worst was over. Two months later, this allergy caused Michelle to suffer a major seizure one night in her sleep, and she woke up blind the next morning.

In the last year and a half, Michelle Plunkett has faced many losses. Not only did she lose her vision, she lost her ROTC scholarship, her job as a personal trainer and her finance, who decided to leave Michelle after she lost her sight. After much mourning and soul-searching, Michelle made a choice. “I wasn’t going to let everything get to me,” she said. “I made a conscious decision to move forward and continue to live my life the way I always wanted to.”

Her tenacity has paid off. After contacting the Department of Labor nearly every week for six months, Michelle began to get the things she needed: financial support for school, adaptive aids, a guide dog, and training at CVI. “I’m sure I drove them crazy,” she said with a laugh. “I kept on asking when I could start receiving services and if I could do anything to speed up the process.”

Michelle received services at CVI between April and November of 2009, and according to her instructors, she flew threw her classes at a record pace. “CVI was like a second home to me,” said Michelle. “It gave me a sense of community.” Michelle explained, “I’m very close to my family, but it’s hard to talk to them because they can’t completely understand what I see and what I feel. At CVI, I was with people who do understand.” Al Kaufman, CVI O&M teacher, worked one-on-one with Michelle. “She is truly an inspiration for me,” he said. “Any time I pity myself, I think of what she has overcome in such a short time.”

With just three more semesters to go, Michelle has big plans for her future. She wants to get a masters degree in kinesthesiology or physical therapy and a Ph.D. in physics. In the meantime, she’s studying and working as a research assistant in the computer science and psychology departments at Georgia Tech. One day, she wants to work with or adopt special needs kids. “Just because you have a disability, it doesn’t mean you can’t accomplish things — it’s just a little harder to do,” she said. “I want to teach these children that if you set your mind to it, you can do anything. And don’t let anyone say you can’t!” 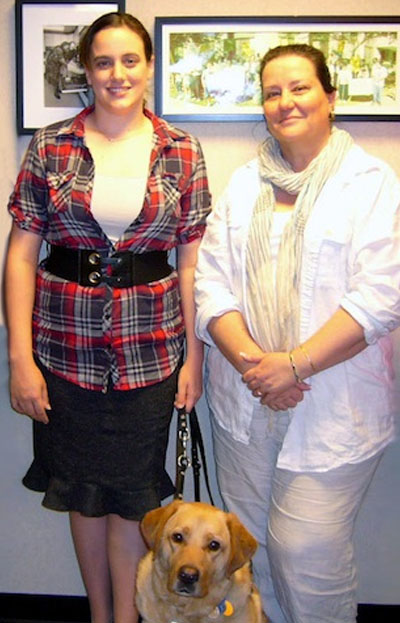