I See Myself…
“Making the Best of What I’ve Got”

For the last 60 years, Henry Nagel has been an avid reader. As a retired tax attorney and lawyer, he read not only for professional reasons, but for personal ones as well. “I get such enjoyment from non-fiction,” said Henry. “I love to increase my knowledge from the books that I read.” Therefore, he was devastated when he began to have problems seeing type.

It began gradually. “When reading, I started to notice that I had trouble seeing some of the words. Then I got to the point where I couldn’t read the print in regular books at all. To help alleviate the problem, I began buying large print books, but eventually I couldn’t see those anymore. I bought a Kindle to download books, because I read you could increase the font size; that fix didn’t last long either. I was finally to the point where I couldn’t figure out what to do next.”

Due to optic nerve damage, Henry has lost 95 percent of his vision in the right eye. He has problems with his left eye too, due to a retinal hole and additional retinal problems. He also has glaucoma, which is currently being controlled with medication.

“When my doctor told me that there was nothing else he could do for me, he recommended that I make an appointment with CVI. I was very lucky that he took the next step to get me on the right road; I know of other people in my situation who received the same diagnosis and didn’t get any advice as to where to go next.”

Henry’s first stop at CVI was the Low Vision Clinic. During his initial three-hour consultation, his remaining vision was evaluated and he received expert guidance as to which devices would maximize the use of his limited sight. He also learned that CVI offered a technology class tailored especially for seniors and decided to attend.

Since 2007, CVI Assistant Technology Specialist John Rempel has taught a number of older adults to successfully utilize their personal computers once again, thereby furthering their independence and contributing to the quality of life.
“John was a fantastic teacher, and I looked forward to going to class each week,” said Henry. “He was knowledgeable, responsive, helpful and patient with our many questions. Each student possessed different skill levels and used different computer systems and programs, but John was able to give each of us the individualized attention we needed.”

“People very often come in to class with preconceived ideas about what they can and cannot do,” said John. “These classes provide exposure to specialized software, as well as built in accessibility features, which are not taught in mainstream classes. The validation that the seniors receive from one another throughout the classes is also very beneficial.”

In class, Henry was introduced to MAGic — screen enhancement software that increases the viewable size of the image displayed on the monitor. “Learning how to use MAGic was a literal eye opener for me. No more squinting or leaning in two inches from the screen to decipher letters and numbers. Using it opened a new visual world to me I thought I had lost.”

But there were many more things Henry needed to do that weren’t computer related. That’s where the CCTV came in. “I can’t live without my CCTV,” said Henry. He does everything from reading newspapers, magazines, mail and prescription labels to writing checks and paying bills with it. “What’s wonderful is that I’m able to continue my life-long ritual of starting the day with a cup of coffee and reading my two favorite newspapers – just now under the CCTV.” Using MAGIC and the CCTV complement each other, and by using both of them, Henry says he can “lead a pretty normal visual life.”

Henry has told many friends and acquaintances about CVI. “I tell them not to give up. There are ways to ameliorate your problem, and assistance is available. Although your vision problems won’t be cured per se, there are many things you can do to make the best of what you’ve got!”

As Henry’s vision continues to decline, he plans on revisiting the Low Vision Clinic to be evaluated. “It’s wonderful to know that CVI will be there for me as my vision changes, providing the advice and resources I need to continue to do the things I love.” 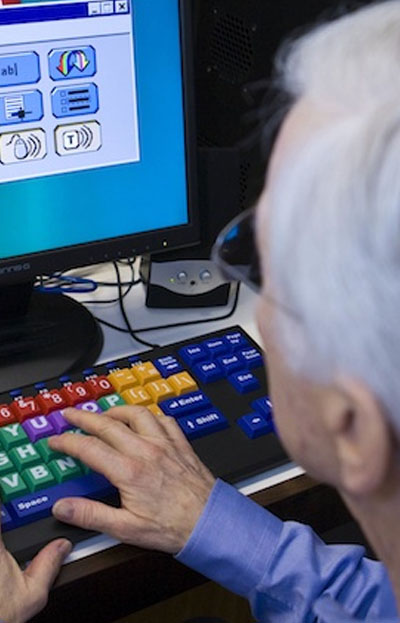