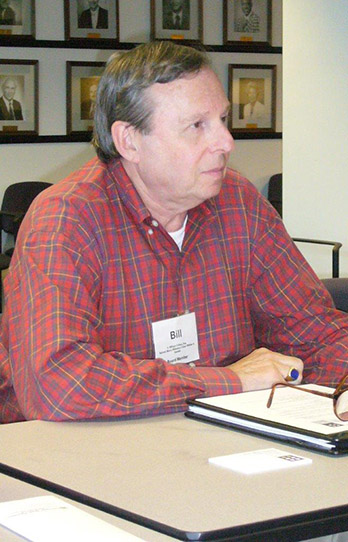 A Client, Volunteer, Mentor and Donor

Bill Cohen, a retired attorney, began volunteering at the Center for the Visually Impaired after experiencing CVI’s beneficial programs and services firsthand. Cohen began losing his vision in 1976 following a one-year military tour in Vietnam. He was diagnosed with an infection that had similar effects as macular degeneration, and in 1998 he was declared legally blind. He first visited CVI in 1999.

“I was scared when I first came. There was just so much I didn’t know,” Cohen said. “But CVI was very important in my life—it kept my life going.”

CVI was not only an important resource for Cohen, but his late wife, Nancy, found the couple support group to be extremely helpful.

“My vision loss was hard on her too; she felt guilty that it was happening to me and that she couldn’t do anything and didn’t know how to help,” he said. “Sharing and talking with other spouses helped us both find the best way through it together.”

Cohen started volunteering with CVI shortly after becoming a client and says he enjoyed being a resource for other clients.

“I think I was a good example and helped them feel that they, too, were going to be able to do more than they might be feeling they could do right at that moment. It was amazing — in just a couple of hours — to see the difference in their attitude and their feeling about their vision loss. I was glad to help them.”

Cohen served in various roles as a volunteer, including mentoring kids and teens in the STARS Youth Services program. He says he worked with some extraordinary young people and enjoyed encouraging them to reach for their goals.

“I recall one youth who became an Eagle Scout, one who is a musician, and another who went on to become a lawyer.”

Cohen says the resources CVI offers for people at all ages and stages in life is invaluable.

“CVI provides that reassurance that children can have successful lives,” he said. “And for people like me and others who lost sight later in life, being able to learn to do things in a new way is so important.”

Cohen also served on the CVI Board of Trustees, and he volunteered on CVI’s Speakers Bureau.

“Sharing my personal story of vision loss and how CVI helped me was a powerful way to educate the public and volunteer my time.”

Now, Cohen remains involved with CVI as a donor, and he continues to stay active and live independently.

“I walk up to two miles every day, and regularly go to my bank and the store. Pretty good for 80. I feel fortunate.”

Learn more about how you can support CVI.